Anniversary of "Roe vs. Wade"‏ 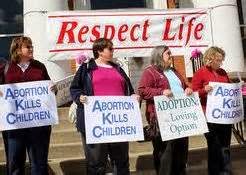 
To paraphrase, President Franklin Delano Roosevelt speech, the day after the Japanese attacked Pearl Harbor, "January 22, 1973" is without any doubt , "A day that will live in Infamy" in the hearts and minds, of more and more of our Country's Citizens, each passing year. The opposition to this horrific law ,is what grows, rather than it's acceptance.

Since 1973, almost 60 Million babies have been Aborted in this country alone. The numbers are truly mind-bog-gling. The seven members of the U.S. Supreme Court, who voted to make Abortion, legal, stated as their primary reason, the "protection of a women's privacy. " Are you kidding me? We've Aborted almost 60 million of our fellow human beings, all in the name of privacy for women. Over half of those Aborted, would now have been women citizens of our country. What happened to their right to privacy and their right to life, liberty and the pursuit of happiness?

Abortion is a cancer that has been eating away at the moral fiber of our country and the only way to treat it, is to destroy it. Children who are born and unwanted by their birth mother and/or their biological father can be cared for by our society and have their chance at the blessings and opportunities that our country holds for all.

Most of us,,have at sometime or other in our life, done something we were ashamed or not proud of,, or the minute we had done it, we wished we could take it make. This is what I believe is the problem that most Pro-Abortion people have. They have been sold a bill of goods by the Abortion industry that has meant the death of over 60 million boys and girls. This is a horrible thing to come to terms with. But the only way to correct a mistake, is to admit to it and vow to never make it again. There is nothing in this world that a person can not be forgiven for, but they have to look past their own feelings and do what is right.


Instead of a "Day of Infamy", let us all look forward to a "Day of Celebration", marking the end to Abortion in our great country.

Bernard Byrne is a member of Our Lady of Guadalupe parish Respect Life Committee.  He and his wife, Barbara live in Doylestown, PA.
Posted by Voices for Life AT 12:34:00 PM